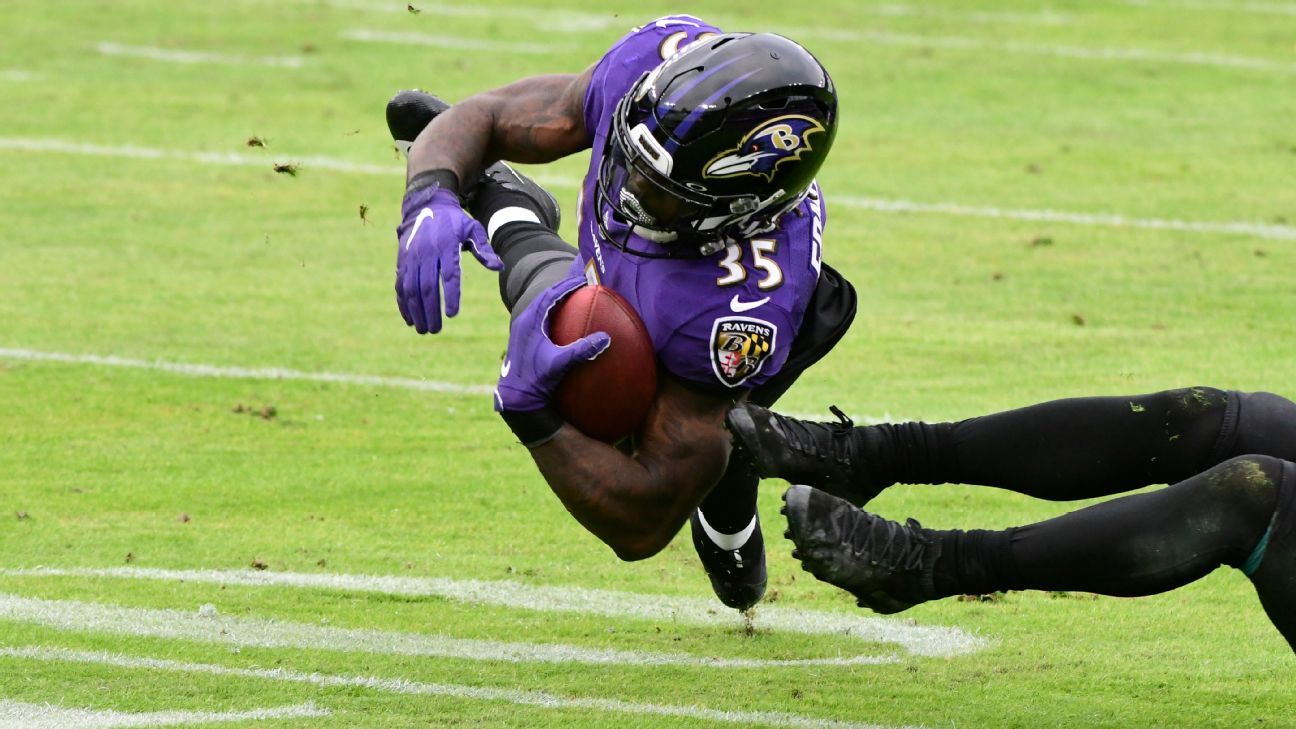 OWINGS MILLS, Md. — Baltimore Ravens running back Gus Edwards was about sign his two-year $10 million extension on Monday when he thought to pick up his phone and share the moment with his father.

“What’s crazy is that my father is actually in Liberia right now,” Edwards said. “He was like, ‘I’m at the house right now.’”

Edwards lived in Liberia until he was five years old, when he immigrated to the United States with his mother. Edwards’ aunt was fortunate to go to America after winning a lottery as part of the Diversity Visa program, and the family decided Edwards’ father and sister would be the two members who would accompany her. A few years later, Edwards joined them, escaping the country during the Second Liberian Civil War.

Edwards, 26, doesn’t remember much about his time in Liberia, outside of taking his farewell pictures on his last day there. On Monday, he posted a picture on Instagram of his father standing in front of his childhood home, which showed the crumbling concrete steps and the deteriorating cinder block walls. Edwards then signed his new deal with Baltimore, which gave him a $3.75 million signing bonus as well as a sense of his journey coming full circle.

“It was just fantastic — just seeing everything come together,” Edwards said. “It’s been a blessing.”

Edwards is a punishing downhill runner in the only NFL offense to ever total more than 3,000 yards rushing in consecutive seasons. He’s often been overlooked, maintaining a low-key personality while playing behind the likes of Mark Ingram II and J.K. Dobbins.

But few players have been as efficient as Edwards. Of the 31 players who have run the ball at least 400 times over the past three seasons, only two have averaged more yards per carry than Edwards (5.20): former NFL MVP Lamar Jackson (6.0) and two-time Pro Bowl running back Nick Chubb (5.23).

“He deserves a lot more credit than he gets,” tight end Mark Andrews said at the end of last season. “He’s the heart and the soul of our team with everything he does, the way he runs the ball. He breaks tackles left and right. He’s a beast.”

Just like he fights for every yard, Edwards had to battle for his spot in Baltimore after being the team’s No. 5 running back three years ago. Undrafted out of Rutgers in 2018, Edwards was cut before the regular season, as the Ravens kept Alex Collins, Buck Allen and Kenneth Dixon at running back.

Edwards was signed to the Ravens’ practice squad, but he had to bide his time. When Dixon went on injured reserve with a knee injury after the season opener, Baltimore promoted De’Lance Turner instead of Edwards to replace Dixon.

It wasn’t until Turner hurt his hamstring in early October that Edwards was placed on the 53-man roster. And it wasn’t until Jackson took over as the starting quarterback midway through the season that Edwards got a shot to start.

Meshing instantly in Baltimore’s new read-pass option attack, Edwards produced 654 yards rushing in the final seven games of 2018, which ranked behind only Saquon Barkley and Derrick Henry over that span.

What you need to know about the Baltimore Ravens:

In each of the past two years, the Ravens have added to the backfield, signing Ingram in free agency in 2019 and drafting Dobbins in the second round in 2020. But Edwards has kept plowing ahead, gaining a first down on an NFL-best 30.9% of his carries since 2018.

“That’s one person, for sure, when you’re in the hole with [him], you’ve got to brace yourself and get ready, because Gus is ‘Gus the Bus’ for a reason,” Ravens linebacker Patrick Queen said. “He earned that money.”

A restricted free agent, Edwards could have tested the market after the season. Instead, he struck a deal with Baltimore that places him among the top 20 highest-paid backs in the league in average per year.

Staying at a place that feels like home, especially with the path Edwards has taken, means a lot to him.

“I feel like I have unfinished business here,” Edwards said. “I’m comfortable here, I’m happy here and it works for me. In one way or another, I was hoping to stay. I’m just blessed.”

Knights cap series comeback to oust Avs in 6
Not content with calling out Folau, All Black Weber staying equality course
Trucks leader Nemechek wins 2nd straight race
Cancelo to miss Euro 2020, Dalot called up
How are the Giants — yes, the Giants! — the best team in baseball?